What Is Pityriasis Rosea?

Pityriasis rosea (pronounced: pit-ih-RYE-uh-sis ROE-zee-uh) is a harmless temporary skin condition that's common in teens. This pink or gray scaly skin rash can last for 4 to 8 weeks — or, sometimes, months. The rash usually starts with one big patch on the chest, abdomen, thighs, or back that's often mistaken for ringworm.

As the rash spreads, the original patch is joined by a number of smaller spots that spread out across the torso. In some cases, the spots spread to the arms and legs (but it usually doesn't appear on the palms or soles). The spots can be slightly itchy. 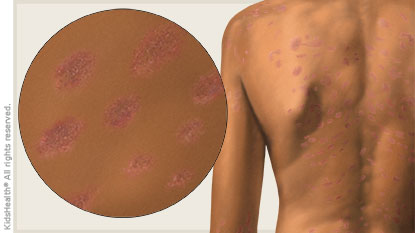 Pityriasis rosea is not contagious. Although sometimes the spots take a while to fade completely, most people have no lasting traces of the rash after it's healed.

Doctors aren't really sure what causes pityriasis rosea. Some think a  causes it, but this hasn't been proved.

Pityriasis rosea is more likely to show up in the spring and fall.

What Are the Signs & Symptoms of Pityriasis Rosea?

Most teens who get pityriasis rosea have no warning signs. Others can have flu-like symptoms (a sore throat, swollen glands, a headache, feeling tired) a few days before the rash appears.

The rash itself usually starts with one large spot, called the herald patch or "mother" patch, which can appear anywhere on the skin but usually is on the chest, belly, back, or thighs. This patch can be raised and may feel scaly. In people with light skin, the patch is pink or red. People with darker skin can see a variety of colors, from violet to brown to gray.

The herald patch might be the only sign of this condition for up to 2 to 3 weeks. As the rash grows, however, smaller spots (called "daughter" spots) can appear across the torso and on the arms and legs. The spots look almost identical on both sides of the body. These small patches are usually oval shaped and often form a pattern on the back that looks like a Christmas tree.

How Is Pityriasis Rosea Diagnosed?

To diagnose pityriasis rosea, doctors check the skin for the telltale signs of the rash. Sometimes doctors gently scrape off a few scales from the rash to examine under the microscope to rule out other possible causes, like ringworm or psoriasis.

How Is Pityriasis Rosea Treated?

Most cases of pityriasis rosea go away in 1 to 2 months without any treatment. Some cases can be as short as 2 weeks, while others can last for 3 months or longer.

When pityriasis rosea does need treatment, it's usually just to control the itching. Over-the-counter itch creams or allergy syrups can help, and so can oatmeal baths.

In some cases, just getting a moderate amount of sunlight can help improve the rash and the itching. If you use this form of therapy, protect yourself from sunburn, which can sometimes make a rash worse.

Light therapy might be prescribed for cases where the itching is really bothersome. Usually, this involves ultraviolet B (UVB) therapy and is done by a .