What Is Pectus Excavatum?

What Is the Nuss Procedure?

The Nuss procedure is a surgery to correct severe pectus excavatum. It's considered "minimally invasive" because only a few small incisions (cuts) are needed.

What Happens During the Nuss Procedure?

The Nuss procedure has several steps. The surgeon: 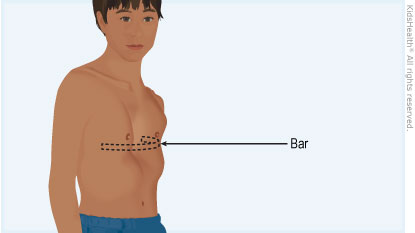 The chest reshapes after about 2–4 years. Then the surgeon removes the bars.

What Happens After the Nuss Procedure?

Even though the Nuss procedure is minimally invasive, kids need pain medicine and rest after the surgery. They need to stay home from school for about 3 weeks. It may take 6 months or more for kids to return to all activities they did before the surgery.

For about 6 weeks after the surgery, kids should:

They shouldn't play sports that could cause a chest injury (such as football, soccer, and baseball) until the surgeon says it's OK.

Are There Any Risks From the Nuss Procedure?

There are risks with any surgery, including bleeding, infection, and problems with anesthesia.

Specific risks for the Nuss procedure include:

Pectus excavatum can make kids feel self-conscious about the way they look. It can also make it hard for them to exercise and play sports, and cause other health problems. The Nuss procedure can improve kids' emotional and physical well-being. The recovery time can be difficult, but most kids are happy with the results.