What Is Supraventricular Tachycardia (SVT)?

Supraventricular tachycardia (SVT) is a type of (abnormal heart rhythm) in which the heart beats very quickly.

The abnormal heart rhythm starts in the atria, which are the top chambers of the heart. Supraventricular tachycardia (soo-pruh-ven-TRIK-yuh-ler tak-ih-KAR-dee-uh) often happens suddenly and can last for a few minutes or many hours.

What Happens in Supraventricular Tachycardia (SVT)?

An area in the atria called the sinus node sends electrical signals that tell the heart to beat at a normal rate. They also tell the heart to speed up during exercise or times of stress, and to slow down during sleep. 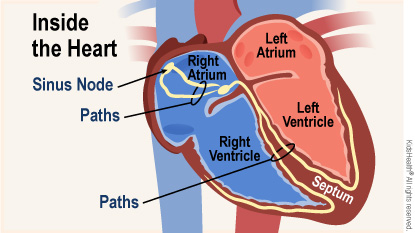 Normally, the electrical signals follow set paths from the heart's top chambers down to its bottom chambers (the ventricles). In people with SVT, the signals can sometimes "short circuit" and make the heart beat faster.

SVT causes the heart to work harder to do its job, especially if it goes on for a long time. Longer episodes can make the heart tired and not able to pump normally.

How long episodes last and how often they happen is different for each person with SVT.

What Are the Signs & Symptoms of Supraventricular Tachycardia (SVT)?

Some kids with SVT have no symptoms at all. When they do, palpitations (a feeling of a fast heartbeat or pounding in the chest) are the most common.

SVT can be congenital, which means a child is born with it. Or SVT can develop later in life. Sometimes SVT happens because of other heart conditions.

Who Gets Supraventricular Tachycardia (SVT)?

How Is Supraventricular Tachycardia (SVT) Diagnosed?

Doctors use several tools to diagnose SVT. It's very important for parents to know their child's  and give this information to the doctor.

The doctor will do a physical exam and order an electrocardiogram (EKG or ECG) to measure the heart's electrical activity. These types of EKGs might be done:

How Is Supraventricular Tachycardia (SVT) Treated?

Treatment might be done when SVT causes symptoms, lasts a long time, or happens often. Options include:

Medicine. Doctors may use medicines (such as beta blockers) that slow the heart rate. This lowers the chances of having frequent or long episodes of SVT. Sometimes, these cause side effects, so a child will see his or her doctor regularly.

Catheter . With the child asleep and comfortable, a (a thin, flexible plastic wire) is guided through a vein or artery in the leg to the heart. When the problem area of the heart is pinpointed, the catheter tip can use hot energy (called radiofrequency ablation) or cold energy (called cryoablation) to destroy the tissues causing the arrhythmia.

Most children with SVT lead a normal life. It's important to follow up with the as often as needed.