What Is Scheuermann's Kyphosis?

What Are the Signs & Symptoms of Scheuermann's Kyphosis?

The main signs of Scheuermann's kyphosis are:

The signs of kyphosis often become obvious during the growth spurt that happens around puberty.

The small bones (called vertebrae) that make up the spine are usually rectangular. They stack like bricks with flexible cartilage in between. When a child has Scheuermann's, the front edge of some of the vertebrae in the upper back grow slower than the back edge. These vertebrae become wedge shaped, so when the vertebrae stack up, the spine curves, making the back round out. 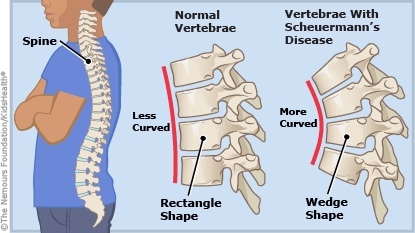 Who Gets Scheuermann's Kyphosis?

Doctors don't know exactly why some kids get it, but Scheuermann's kyphosis runs in families. The signs usually are first seen during or after the puberty growth spurt. Most kids are between 12 and 15 years old when they're diagnosed.

How Is Scheuermann's Kyphosis Diagnosed?

To diagnose Scheuermann's kyphosis, a doctor will:

How Is Scheuermann's Kyphosis Treated?

Kids with Scheuermann's kyphosis will see an orthopedist (a doctor who treats conditions involving the bones). The orthopedist will examine the spine, look at the X-rays, and recommend treatment.

Observation. If the rounding of the back isn't likely to cause any problems, kyphosis may not need any treatment. Kids will have routine checkups to make sure the rounding doesn't start causing problems. Most cases will stop progressing when kids are done growing.

Back brace. This brace is like a jacket that can be worn under clothes. It won't straighten the curve, but will keep it from getting worse. Some kids wear the brace only at night, and others wear it for 18–20 hours a day. The brace is usually worn until a child stops growing.

Physical therapy. Exercises that strengthen the muscles in the back and core to support the spine better can sometimes help.

Surgery. Surgery isn't usually needed. But doctors might recommend a procedure called a spinal fusion for a severe case that causes pain or breathing trouble.

It's important for teens with Scheuermann's kyphosis to get the right treatment before growth is finished. The spine usually won't continue to curve after they're done growing. If your child complains of back pain or has a rounded upper back, talk to your doctor.