Casting usually starts when a baby is a week or two old. The baby will wear a series of 5 to 7 casts over a few weeks or months. When the foot is in its final, correct position, the baby is fitted with a brace.

How Do Casts and Stretches Help?

In the casting phase (also called the "correction phase"), a baby wears casts that gently move the foot into the correct position.

The first cast is put on by an orthopedic surgeon trained in the Ponseti method a week or two after the baby is born. This timing works best because a baby's ligaments and tendons are very elastic, which makes them easy to stretch and move. 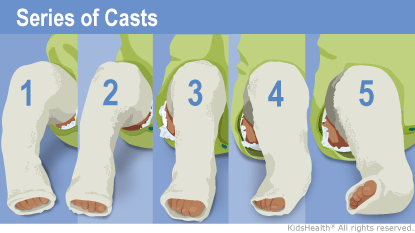 The surgeon will do gentle movements and stretches with the baby's foot before each cast is put on. These help slowly move the foot toward its correct position. Then, the cast is put on to hold that new position until it's time for the next cast.

The baby will go to the orthopedic surgeon about once a week for gentle moving and stretching of the foot, followed by placement of a new cast. The new cast will turn the baby's foot a bit more in the correct direction than the one it is replacing.

What Happens When a Cast Is Put On?

After gently stretching and moving the clubfoot, the doctor will place a long-leg cast on your child. This means the cast begins at the toes and ends above your child's thigh.

First, the doctor will wrap padding around the foot and leg from the toes to the knee. You might be asked to feed your baby while the doctor does this so that your little one is distracted. Then, plaster is applied and the cast is molded into place. The toes are not covered.

About a week later, that cast will be removed by the doctor right before a new one is put on. The doctor will stretch the foot and then put on the next cast, which will move your child's foot even more toward its proper position.

Kids might fuss a little when a cast is put on. This is because the skin that's been covered by the casts is more sensitive than the rest of the baby's skin. But putting the cast on and removing it are not painful.

Casts are either soaked off or taken off with a small electrical saw. The blade has a dull, rounded edge that vibrates from side to side. This vibration is strong enough to break apart the plaster but won't hurt skin.

Most babies will wear a series of 5 to 7 casts over a few weeks or months.

What Is the Heel Cord Release?

Until the final casting, a baby's casts have been moving the clubfoot from its incorrect inward-facing position to the correct outward position. The last cast a baby wears will move the foot from the downward position up into its final corrected position.

To help get the foot up, most babies need a minor heel cord release procedure (called an Achilles tenotomy) before the last cast is put on. A very tight tendon by the baby's heel is loosened (or "released") when the surgeon makes a small cut in it. The tendon is numbed with medicine first, and the cut is so small that it does not need stitches. It will heal while the child wears the final cast for about 3 weeks.

How Do I Take Care of a Cast?

Keep your baby's cast clean and dry. Give your baby sponge baths, and use disposable diapers with elasticized legs. Change diapers often to help keep the cast clean. If the cast gets dirty, wipe it with a damp cloth or baby wipe.

Check the circulation in your baby's foot every hour for the first 6–8 hours after a new cast is put on, and then a few times each day:

Also call the doctor if the cast cracks, the skin at the top or bottom of it gets very red or irritated, or your baby is still very fussy after a day or two of wearing the cast.

When a baby's foot has been moved into its final, correct position from the casts and stretches, the orthopedic surgeon will fit the baby with a brace, which is a bar with shoes or boots at each end. It keeps the foot from twisting back to where it was before the casting.

A child will wear the brace all the time for about 3 months, and then only at night and during naps for a few years. Feet grow a lot and very quickly in the first years of life. Without the brace to keep a corrected clubfoot in the proper place, that rapid growth would send the foot back into the clubfoot position.

Permanent correction of a clubfoot takes time. It's important for parents to work with the care team and follow the treatment plan to help their child get the best possible result. Consider yourself a partner in your child's care.

The Ponseti method is successful for most kids with clubfoot, and will let them walk, run, and play without pain. After a clubfoot is fully corrected, kids will see their specialist for follow-up visits. After age 5, most only go once a year until they're done growing (around age 18) to make sure no problems develop.