Surgeries and Procedures: Retinopathy of Prematurity

Retinopathy of prematurity (ROP) is a disease of premature babies that causes abnormal blood vessels to grow in the retina, the layer of nerve tissue in the eye that enables us to see. This growth can cause the retina to detach from the back of the eye, leading to blindness.

Some cases of ROP are mild and correct themselves, but others require surgery to prevent vision loss or blindness. Surgery involves using a laser or other means to stop the growth of the abnormal blood vessels, making sure they don't pull on the retina.

Because there are varying degrees of ROP, the surgical approach used can differ for each case. The more you know about retinopathy of prematurity and your baby's surgery, the easier the experience is likely to be for you.

Located in the inner membrane of the eye, the retina is a layer of nerve tissue that captures light from an object and converts it to electrical impulses, then sends these impulses to the brain. For the retina to work properly, it must receive blood from a network of blood vessels. 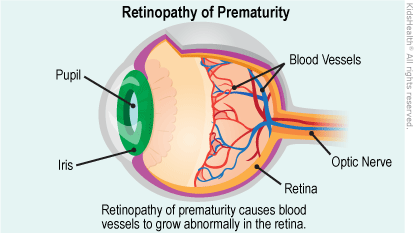 When blood vessels grow abnormally and randomly, they become fragile and tend to leak or bleed. This causes scarring of the retina. When the scars shrink, they pull on the retina, causing it to detach from the back of the eye. Since the retina is a vital part of vision, detachment of the retina will cause blindness.

ROP can stop or reverse itself at any point, so it often resolves as a baby grows. But if the disease has progressed to the point of scarring, the retina will begin to detach.

ROP has no signs or symptoms. The only way to detect it is through an eye examination by an ophthalmologist. 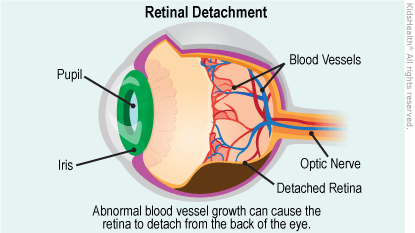 Normally, blood vessels grow from the center of a developing baby's retina 16 weeks into the mother's pregnancy, and then branch outward and reach the edges of the retina 8 months into the pregnancy. In babies born prematurely, normal retinal vessel growth may be disrupted and abnormal vessels can develop, which can cause leaking and bleeding in the eye.

Since surgery focuses treatment on the peripheral retina, these areas will be scarred and some amount of peripheral vision may be lost. However, by preserving the central retina, the eye will still be able to perform vital functions like seeing straight ahead, distinguishing colors, reading, etc.

The most frequently used methods of ROP surgery are:

For more advanced cases of ROP where retinal detachment has occurred, these methods are used:

Your baby's ophthalmologist will determine and discuss with you which ROP surgery method is best.

Once your child is admitted to the hospital, you'll have to fill out some paperwork and provide basic information, including:

You'll wait for surgery in the pre-operative area within the hospital, and your baby will be given an ID bracelet. A nurse will check some of your baby's vital signs and put in place these monitors:

Depending on the availability of a surgical room, you and your baby might have to wait for a little while for the surgery to begin.

Talking to the Pediatric Ophthalmologist

Your baby's pediatric ophthalmologist will probably describe the procedure and answer any questions you might have. This is a good time to ask questions about anything regarding the procedure that you don't understand.

Once you feel comfortable with the information and your questions have been fully answered, you'll be asked to sign an informed consent form, stating that you understand the procedure and its risks and give your permission for the surgery.

Laser surgery and cryotherapy are performed under deep sedation, while scleral buckling and vitrectomy are performed under general anesthesia. It's very important to follow your doctor's instructions on when to have your child stop eating or drinking (for babies on breast milk only, this is typically 2 hours before the procedure; for toddlers and older children, it may be up to 8 hours before).

Although there is no cutting or stitching involved in laser surgery or cryotherapy, all surgical procedures for retinopathy of prematurity require that the baby be given sedation and pain medication or general anesthesia.

Laser surgery and cryotherapy are usually done at the child's bedside with sedation and pain medication. Since scleral buckle and vitrectomy surgeries require general anesthesia, they are performed in an operating room. For all procedures, your baby's breathing and heart rate will be closely watched during the surgery.

Your child will receive eye drops to dilate the pupil(s) before each procedure. During the surgery, a tool called an eyelid speculum will be gently inserted under the eyelids to keep them from closing.

Whether a child will be kept in the hospital is determined by his or her age at the time of surgery in addition to medical condition. In most hospitals, any children undergoing surgery before 52 weeks of gestational age will be admitted for 23 hours' observation after the procedure.

The eye will be covered with a patch after scleral buckling and vitrectomy, but not after laser or cryotherapy.

Laser surgery is the most common type of ROP surgery and uses a beam of light to create scar tissue on the peripheral retina. Using the laser, the ophthalmologist aims beams of light at the peripheral retina and burns, then scars, the area where abnormal blood vessels have not yet reached.

Laser surgery usually takes about 30-45 minutes for each eye. After the surgery, you'll probably notice that your baby's eyes and eyelids are a little red. Also, you might see some swelling around the eyelids. This is normal and can last from a few days to a few weeks. The eye will not be covered and your baby will receive eye drops for a week.

For a cryotherapy procedure, a metal probe that has been exposed to liquid nitrogen (an extremely cold gas) is placed on the sclera, or white of the eye. The freezing temperature then quickly travels to the peripheral retina and freezes and scars the area.

Cryotherapy treatment takes about 30-45 minutes. You will notice redness in your baby's eye and possibly around the eyelid, as well as some swelling. The eye will not be covered and your baby will receive eye drops.

Scleral buckling is a procedure reserved for ROP cases in which the retina has started to detach. The concept involves wrapping a band or "buckle" around the side of the eye (in other words, not around the lens). This band forces the retina to remain in place. This "buckling" reduces the pressure and pulling on the retina. This procedure is performed by a retinal surgeon.

The surgeon first uses laser surgery or cryotherapy to destroy the abnormal blood vessels. After that, a band (commonly made of silicone) is wrapped around the sclera and over the detaching retina. If there is too much fluid under the detached retina, the surgeon might make a small incision to drain it. Then, the band is stitched in place. 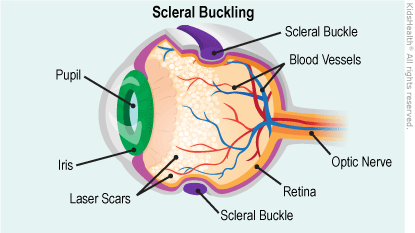 Scleral buckling can take 1-2 hours and your baby will have redness in the eyes and around the eyelids, as well as some swelling in that area. The eye will be covered with a patch until it heals.

Patients who undergo scleral buckling should have the buckle examined every 6 months, or more frequently if there is a problem. The buckle will be removed if there is a sign that it is too tight or causing a problem. Eventually, it will be permanently removed (months or years later) to accommodate the growing eye.

Vitrectomy involves removing the eye's vitreous (the clear gel in the center of the eye) and replacing it with a saline solution that functions much like the real thing. Vitrectomy allows a retinal surgeon to remove scar tissue from the inside of the eye and relieve pulling on the retina.

Using a microscope and special lenses placed on the eyeball to get a better view of the back of the eye, the surgeon will use a scalpel to make several small incisions on the sclera. Tiny surgical tools are inserted through the incisions, including a fiber-optic tool for light and laser treatment, a small cutting tool, and an infusion line (a tube that maintains pressure so the eye doesn't lose its shape).

The cutting tool is used to remove the vitreous and eliminate any scar tissue, blood, or debris in the eye. Then, using the infusion line, the vitreous is replaced with a saline solution.

All incisions are then closed with sutures (stitches) that will dissolve on their own. A vitrectomy can take several hours. Your baby will have redness in the eyes and around the eyelids, as well as some swelling in that area. The eye will be covered with a patch until it heals.

If admission to the hospital isn't necessary, you'll be able to take your child home about an hour after the procedure. Follow-up care for ROP surgery includes giving your child eye drops (to prevent infection) for at least a week.

To make sure the eyes are healing properly and that ROP hasn't returned, eye exams should be scheduled based on instructions from the ophthalmologist. This is usually every 1-2 weeks. For scleral buckling, the ophthalmologist must examine the buckle every 6 months to account for your child's growing eye.

Treating retinopathy of prematurity helps preserve a child's vision. If the disease isn't addressed, abnormal blood vessels can cause the retina to detach, permanently damaging the eyes and causing blindness.

The goal of surgery for retinopathy of prematurity is to stop the progression of the disease and prevent blindness. Although ROP surgery has a good success rate, not all babies respond to treatment. Up to 25% of babies who have ROP surgery might still lose some or all vision.

In some cases, laser surgery or cryotherapy isn't successful (meaning the abnormal blood vessels continue growing) and might have to be repeated. If the growth continues, scleral buckling or vitrectomy might have to be attempted. However, it's important to know that surgery for advanced stages of ROP doesn't guarantee that the retina will re-attach and sight will be restored.

Keep in mind that for all types of ROP surgery, a degree of your child's peripheral (side) vision will be lost. And even if the ROP has stopped progressing, vision can still be affected in the following ways:

Since some vision loss and complications can occur, any child that has had ROP surgery should have regular, yearly eye exams well into adulthood.