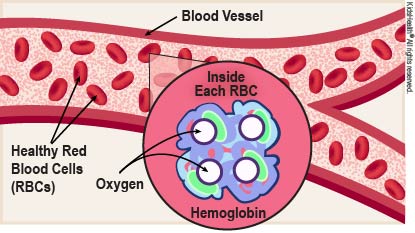 Some people with anemia don't have any symptoms. Someone who does have symptoms might:

Treatment for anemia depends on the cause. Teens with anemia might need:

If you have iron-deficiency anemia, your doctor will probably prescribe an iron supplement to take several times a day. Your doctor may do a follow-up blood test after you've been taking the supplement for a while. Even if the tests show that the anemia has improved, you might have to keep taking iron for several months to build up your body's iron stores.

To make sure you get enough iron, eat a balanced diet every day, starting with a breakfast that includes an iron source, such as an iron-fortified cereal or bread. Lean meat, raisins, chard, eggs, nuts, dried beans, tomato sauce, and molasses also are good sources of iron.

If someone's anemia is caused by another medical condition, doctors will work to treat the cause. People with some types of anemia will need to see a hematologist, who can provide the right medical care for their needs.

The good news is that for most people, anemia is easily treated. And in a few weeks they'll have their energy back!