A to Z: Cryptorchidism

Cryptorchidism (krip-TOR-kih-diz-um), also known as undescended testis, is a condition in which one or both of a boy’s testicles (testes) have not moved into their proper place in the scrotum. 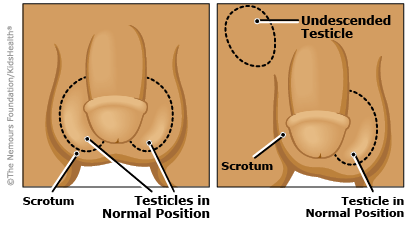 A baby boy's testes (testicles) develop in his abdomen before birth. Usually, the testes drop, or descend, from the baby's abdomen into the scrotum shortly before birth. If this does not happen, the baby is born with cryptorchidism, also called undescended testis. Most cases involve one testicle, but occasionally both testes can be undescended.

If the testis doesn't does not drop to the usual location by the time a baby is 6 months old, surgery is required. Orchiopexy (or-kee-oh-PEK-see) is a common outpatient procedure to correct an undescended testicle (testis).