What Is an Insect Sting Allergy?

Insect stings usually are minor annoyances. But they can cause serious reactions in people who are allergic to them.

Insects that can trigger allergic reactions include honeybees, yellowjackets, hornets, wasps, and fire ants. When they sting, they inject venom into the skin.

What Happens in an Insect Sting Allergy?

When someone is allergic to insect stings, the body's immune system, which normally fights infections, overreacts to proteins in the insect's venom. When stung, the body sees these proteins as harmful invaders.

The immune system responds by working very hard to fight off the invader. This causes an allergic reaction, in which chemicals like histamine are released in the body. This release can cause symptoms such as:

Anaphylaxis can begin with some of the same symptoms as a less severe reaction, but these can quickly become worse. Anaphylaxis that's not treated can be life-threatening. A person with anaphylaxis needs treatment with injectable epinephrine right away.

How Are Reactions From an Insect Sting Treated?

If your child has been diagnosed with an insect sting allergy, always keep two epinephrine auto-injectors on hand in case of a severe reaction. If your child starts having serious allergic symptoms, like throat swelling or trouble breathing:

An epinephrine auto-injector comes in a small, easy-to-carry container. It's simple to use. Your doctor will show you how to use it. Kids who are old enough can be taught how to give themselves the injection. 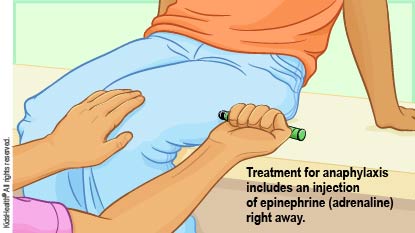 Share emergency plans with anyone who cares for your child, including relatives and school officials. Together, agree on a plan in case of a serious reaction at school, including making sure that injectable epinephrine is available at all times. If your child is old enough to carry the epinephrine, it should be in a purse or backpack that's with your child at all times, not in a locker. Also consider having your child wear a medical alert bracelet.

The best way to prevent allergic reactions to insect stings is to avoid getting stung in the first place. Teach your child to:

If your child is stung and a stinger remains in the skin, use your fingernail or a credit card to scrape the stinger from the skin. Removing the stinger quickly can help prevent more venom from going into the body. Don't use tweezers because they can cause more venom to be released.

Talk with your doctor about whether your child should see an allergy specialist about getting allergy shots. These can help the body react less to insect venom, which can make a serious reaction less likely.