What Is Nursemaid's Elbow?

Nursemaid’s elbow is a common injury among toddlers and preschoolers. It happens when a ligament slips out of place and gets caught between two bones in the elbow joint.

Nursemaid's elbow (also called a pulled elbow) causes arm pain, but it's easy for a doctor to fix and causes no long-term problems.

What Are the Signs & Symptoms of Nursemaid's Elbow?

The injury might not be obvious because nursemaid's elbow doesn't make the elbow look swollen or bruised. A child with nursemaid's elbow will not want to use the injured arm because moving it is painful. They will hold the arm straight or with a slight bend in the elbow. Kids will say it hurts in the wrist, forearm, or elbow.

An arm or elbow injury that causes severe pain, bruising, or swelling might be a sign of an elbow fracture (broken bone). It can be hard for a parent to tell whether an elbow injury is nursemaid's elbow or a fracture, so it's important to call the doctor if your child has an injured elbow.

Young kids have a ligament in the elbow that is a bit loose. Sometimes during play or when they're lifted by the arm, two bones in the elbow can briefly separate a little bit. This can let a ligament slip into the joint, which then gets stuck. As kids get older, the ligament tightens. Most won't get nursemaid's elbow after age 5, though it can happen up to age 6 or 7.

Common ways for nursemaid’s elbow to happen include:

How Is Nursemaid's Elbow Diagnosed?

To diagnose nursemaid's elbow, health care professionals check the arm and ask how the injury happened. They usually don't need to do any special tests. They'll order an elbow X-ray only if there might be a fracture or the cause of the injury isn't clear. 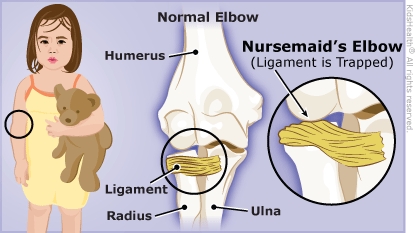 How Is Nursemaid's Elbow Treated?

Sometimes the ligament gets unstuck by itself. But in most cases, a health care professional does a gentle arm move called a reduction to get the ligament out from between the two bones. The child sits on a parent's lap as the doctor moves the arm, which takes only a few seconds. You might hear a “pop” as the joint moves back into place. The move might be briefly uncomfortable, but kids quickly feel much better. Most have full use of their arm in 5–15 minutes. Some might need than one reduction to successfully fix the injury.

Occasionally, a child may not want to use the arm after a reduction if they worry it might be painful. If there is some discomfort, the doctor may put the arm in a sling and say it's OK to give acetaminophen or ibuprofen for pain relief. In some cases, the doctor may place a splint (a partial cast) or a sling on the arm until a specialist can check it after a few days of rest. The specialist can look for any other problems.

Kids can get nursemaid's elbow more than once. To help prevent it, parents and caregivers should never pull, tug, or swing a child by the arms or hands. Always pick up your child from under the armpits and not by the hands or arms.

Some kids, though, are just more likely to get nursemaid's elbow, and might get it again even when parents try hard to prevent it.