What Is a Cleft Lip?

Babies who are born with cleft lip have a gap or opening in the upper lip. This happens when the baby's lip doesn't form properly early in pregnancy, resulting in a split.

These orofacial clefts are some of the most common birth defects. Most kids can have surgery to repair them early in life.

A cleft lip can be:

Clefts can range in size:

During the first 6 to 10 weeks of pregnancy, the bones and skin of a baby's upper jaw, nose, and mouth normally come together (fuse) to form the roof of the mouth and the upper lip. A cleft lip happens when parts of the upper lip and/or gum do not fuse together completely.

Doctors don't always know why a baby develops a cleft lip, though some clefts may be related to genetic (inherited) factors. Also, some environmental factors can increase the risk of a birth defect, such as:

How Is a Cleft Lip Diagnosed?

Usually, cleft lip is found when a baby is born. Sometimes, it's seen on a prenatal ultrasound.

Cleft lip can be associated with feeding problems. Later in life, it may lead to dental problems, speech problems, and even issues with self-esteem and social interactions. So it's important to correct a cleft lip with surgery while a child is young.

How Is a Cleft Lip Treated?

Most babies who have a cleft lip have a surgery called cheiloplasty (KY-lo-plass-tee) to repair it when they're about 3 months old. This is done in the hospital while the baby is under general anesthesia.

The goals of cleft lip repair are to:

If the cleft lip is wide, special procedures like lip adhesion or nasal alveolar molding (NAM) might help bring the parts of the lip closer together and improve the shape of the nose before the cleft lip repair. Cleft lip repair usually leaves a small scar under the nose. 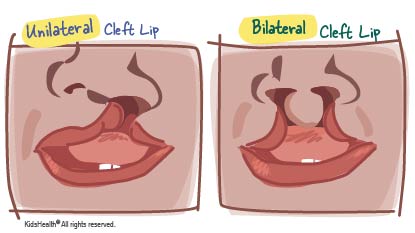 Cleft lip repair and other surgeries to help kids born with a cleft lip have greatly improved in recent years. Most kids who undergo them have very good results. There are risks with any surgery, though, so call the doctor if your child:

A baby with a cleft lip can sometimes have other health problems, such as:

It's important to work with a care team experienced in treating children with cleft lip and palate. Besides the pediatrician, a child's treatment team will include:

Some children with cleft lip may need more surgeries as they get older. These might include:

Most kids with cleft lip are treated successfully with no lasting problems. A team experienced in treating children with cleft lip and palate can create a treatment plan tailored to your child's needs.

The psychologists and social workers on the treatment team are there for you and your child. So turn to them to help guide you through any hard times. You also can find more information and support online: