Bronchiolitis (brong-kee-oh-LYE-tiss) is an infection of the respiratory tract. It happens when tiny airways called bronchioles (BRONG-kee-olz) get infected with a virus. They swell and fill with mucus, which can make breathing hard.

Bronchiolitis is more common during the fall and winter months. Most cases can be managed at home.

What Are the Signs & Symptoms of Bronchiolitis?

The first symptoms of bronchiolitis are usually the same as those of a cold:

Usually, symptoms get better on their own. But sometimes the cough might get worse and a child may start wheezing or have trouble breathing.

Bronchiolitis: When Should I Call the Doctor?

Bronchiolitis often is a mild illness. But sometimes it can cause severe symptoms. When it does, kids need treatment in a hospital to get fluids and, sometimes, help with breathing.

Call your health care provider if your child:

Get medical care right away if your child:

You know your child best. Call your doctor right away if something doesn't seem right. 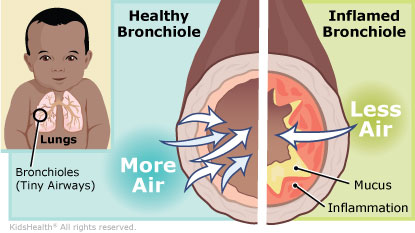 Respiratory syncytial virus (RSV) is the most common cause of bronchiolitis. Sometimes, the common cold and the flu also can cause it.

Kids who are around secondhand smoke have a higher risk for bronchiolitis. Older kids and adults can get bronchiolitis, but the infection usually is mild.

How Is Bronchiolitis Diagnosed?

When they suspect bronchiolitis, doctors listen to the child's chest and check oxygen levels with a pulse oximeter.

Usually, no tests are needed. The doctor may use a swab to get a sample of mucus from the nose for testing. This helps with identifying the type of virus causing the problem.

A chest X-ray might be done if the child's oxygen level is low or the doctor suspects pneumonia.

How Is Bronchiolitis Treated?

Treatment focuses on easing symptoms. Kids with bronchiolitis need time to recover and plenty of fluids. Make sure your child gets enough to drink by offering fluids in small amounts often.

You can use a cool-mist vaporizer or humidifier in your child's room to help loosen mucus in the airway and relieve cough and congestion. Clean it as recommended to prevent buildup of mold or bacteria. Avoid hot-water and steam humidifiers, which can cause scalding.

To clear nasal congestion, try a nasal aspirator and saline (saltwater) nose drops. This can be especially helpful before feeding and sleeping.

Talk to the doctor before giving your child any medicine. For babies who are old enough, you may be able to give medicine to help with fever and make your child more comfortable. Follow the package directions about how much to give and how often. Do not give aspirin to children who have a viral illness. Such use is linked to Reye syndrome, which can be life-threatening. Babies and young kids should not be given any cough or cold medicines.

Viruses that cause bronchiolitis spread easily through the air when someone with an infection coughs or sneezes. Germs can stay on hands, toys, doorknobs, tissues, and other surfaces. People can be contagious for several days or even weeks.

How Long Does Bronchiolitis Last?

Bronchiolitis usually lasts about 1–2 weeks. Sometimes it can take several weeks for symptoms to go away.

Can Bronchiolitis Be Prevented?

Washing hands well and often is the best way to prevent the spread of viruses that can cause bronchiolitis and other infections.