What Is a Tonsillectomy?

A tonsillectomy is surgery to remove the tonsils. Tonsils are lumps of tissue on both sides of the back of the throat that help the immune system protect the body from infections.

Tonsillectomy (pronounced: tahn-suh-LEK-tuh-mee) is one of the most common surgeries teens get. But they're done less often than in the past because large tonsils often shrink on their own over time.

Why Are Tonsillectomies Done?

Teens usually have a tonsillectomy because:

What Happens Before a Tonsillectomy?

Your health care provider will let you know if you should stop taking any medicine in the week or two before the surgery. You'll also be told when to stop eating and drinking because your stomach must be empty on the day of the procedure.

What Happens During a Tonsillectomy?

An ear, nose, and throat (ENT) surgeon will do the surgery while you're under general anesthesia. This means an anesthesiologist will keep you safely and comfortably asleep during the procedure.

The surgery is done through your open mouth. There are no cuts through the skin and no visible scars.

The two main types of tonsillectomy surgery are: 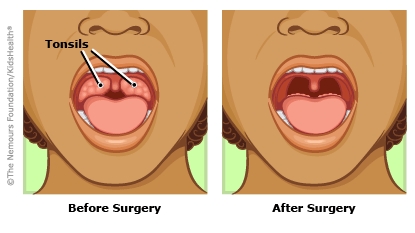 How Long Does a Tonsillectomy Take?

A tonsillectomy usually takes about 20 to 30 minutes, though it can take a little longer.

What Happens After the Tonsillectomy?

You'll wake up in the recovery area, where your parents can join you. Many teens go home the same day, though some may stay overnight.

Depending on the type of surgery done, recovery after a tonsillectomy may take a week or longer. Expect some pain and discomfort after the tonsils are removed, which can make it hard to eat and drink.

Are There Any Risks From Tonsillectomy?

There are risks with any surgery, including infection and problems with anesthesia.

Some people might get dehydrated from not drinking enough when they go home, and may need to come back to the hospital for fluids.

Rarely, bleeding might happen during the surgery, right after it, or up to 2 weeks later. Call the doctor right away if you cough up, throw up, or spit out bright red blood or blood clots. Doctors might need to do another procedure to stop the bleeding.

How Can I Feel Better?

Take pain medicine as directed by your health care provider.

Rest at home for a few days following surgery and take it easy for a couple of weeks. You can return to school when you can eat normally, are sleeping well, and don't need pain medicine.

Get plenty to drink, and eat soft foods like pudding, soup, gelatin, or mashed potatoes until you're ready for solid foods.

For 2 weeks after surgery, avoid blowing your nose and don't play contact sports.

Call the doctor if you:

Call the doctor right away if you vomit blood or something that looks like coffee grounds, or have trouble breathing.

After tonsillectomy, you can still get colds, sore throats, and throat infections. But you won't get tonsillitis unless the tonsils grow back, which is uncommon.

Even though the tonsils are part of the immune system, removing them doesn't affect your body's ability to fight infections. The immune system has many other ways to fight germs.