Lyme disease is the leading tick-borne disease in the United States. It's most common in the Northeast and the northern midwestern states.

Lyme disease is caused by a type of found in animals like mice and deer. Deer ticks (also called black-legged ticks) that feed on these animals can then spread the bacteria to people through tick bites.

It's easy to overlook a tick bite. Many people who get Lyme disease don't remember being bitten. The good news is that most tick bites don't lead to Lyme disease. But it still helps to know what to watch for.

Lyme disease can affect different body systems, such as the nervous system, joints, skin, and heart. The symptoms of Lyme disease are often described as happening in three stages. Not everyone with Lyme has all of these, though:

This wide range of symptoms can make Lyme disease hard for doctors to diagnose. But they can order blood tests to look for signs of the body's reaction to Lyme disease.

If a tick bites you, call your doctor. Other conditions can cause similar symptoms, so it's always a good idea to discuss them with your doctor. That way you can get checked and treated, if needed. Call right away if you get a red-ringed rash, lasting flu-like symptoms, joint pain or a swollen joint, or facial paralysis.

Doctors usually treat Lyme disease with a 2- to 4-week course of antibiotics. People whose Lyme disease is diagnosed quickly and treated with antibiotics almost always have a good outcome. They usually feel back to normal within several weeks of starting treatment.

Lyme disease is not contagious, so you can't catch it from another person. But you can get it more than once from ticks that live on deer, in the woods, or travel on your pets. So always be cautious, even if you've already had Lyme disease.

There's no sure way to avoid getting Lyme disease. But you can minimize your risk. Be aware of ticks when you're in high-risk areas. If you work outdoors or spend time gardening, fishing, hunting, or camping, take precautions:

If you use an insect repellent containing DEET, follow the directions on the product's label and don't overapply it. Place DEET on shirt collars and sleeves and pant cuffs, and only use it directly on exposed areas of skin. Be sure to wash it off when you go back indoors.

No vaccine for Lyme disease is currently on the market in the United States.

How Do I Remove a Tick?

You should know how to remove a tick just in case one lands on you or a friend. To be safe, remove the tick as soon as possible. 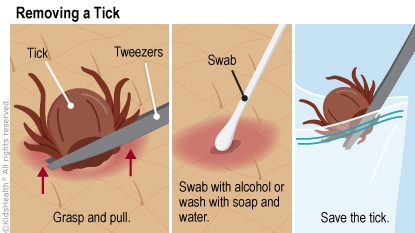 If you find a tick:

Note: Don't use petroleum jelly or a lit match to kill a tick. They won't get the tick off your skin quickly enough, and may just cause it to burrow deeper into your skin.

CHOC Children's is affiliated with the UC Irvine School of Medicine