What Is a Venous Malformation (VM)?

A venous malformation (VM) is a place in the body where veins haven't developed in the usual way. Veins in a VM tend to be larger and more tangled than normal veins. A venous (VEE-nis) malformation close to the skin usually looks like a maroon, blue, or purple spot.

Kids who have VMs are born with them. A VM might not be visible until later when it has gotten bigger or its veins have stretched. Venous malformations that are deep in the muscles or body might not be found until a child has pain or swelling. A VM grows as a child grows, and also might be more noticeable in response to injury or partial removal. 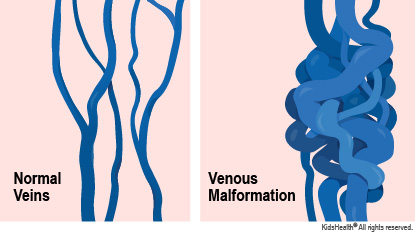 What Are the Signs & Symptoms of a Venous Malformation (VM)?

Kids with a venous malformation may have these symptoms:

Venous malformations are the most common type of vascular malformation (also called vascular anomalies). These are problems that happen when blood vessels (arteries, veins, or lymphatic vessels) don't develop as they should.

Most have no clear cause, but a few are due to genetic conditions and may run in families.

Some rare genetic conditions that include VMs are:

How Is a Venous Malformation Diagnosed?

Doctors usually diagnose a venous malformation based on a child's health history, pictures and imaging of the VM, and an exam.

To learn more about how the VM is attached to other blood vessels and to see if internal organs are affected, the doctor may order these imaging tests:

How Is a Venous Malformation Treated?

Venous malformations can be very hard to treat, and often remain after treatment. So they're usually treated only if they:

A vascular anomaly specialist should check VMs in sensitive areas, such as the face, neck, hands, or feet or those that affect internal organs.

Treatment may involve doctors from several different specialties and include:

What Else Should I Know About Venous Malformations?

VMs grow along with a child, so tend to get bigger as the child grows. Regular follow-up with your doctor is important.

Research continues into treatments and ways to prevent regrowth after treatment. New medicines and genetic research for these and other vascular problems are advancing. New treatments might be available in the next few years.

Kids may feel shy or embarrassed about how a venous malformation looks. Be sure to support your child emotionally. It can help to find a local support group where other families can talk about what works for them. Ask your child's care team for recommendations. You also can look online at:

Talking to a therapist can help kids and teens if they're feeling sad or upset about a venous malformation or its treatment.

CHOC Children's is affiliated with the UC Irvine School of Medicine