What Is a Perforated Eardrum?

A perforated (PER-fer-ate-id) eardrum can hurt, but most heal in a few days to weeks. If they don't heal, sometimes doctors do a surgery to fix the hole.

What Does the Eardrum Do?

The eardrum is a thin piece of skin-like tissue that's stretched tight — like a drum — across the opening between the ear canal and the middle ear.

The outer ear funnels sound waves into the ear canal that hit the eardrum and make it vibrate. The middle ear and inner ear change the vibrations to signals that the brain senses as sounds.

A ruptured eardrum can't vibrate as well as it should. This can cause a hearing problem, which often is temporary.

What Causes a Perforated Eardrum?

Many things can tear an eardrum, such as:

What Are the Signs & Symptoms of a Perforated Eardrum?

Call the doctor right away if your child has any symptoms of a perforated eardrum. Even though most perforations heal on their own, it's important to make sure any hearing loss is temporary.

Go to the emergency room right away if your child has:

How Is a Perforated Eardrum Diagnosed?

To check for a perforated eardrum, doctors check the ear canal with a lighted instrument called an otoscope. Often, a doctor can see the tear and sometimes the tiny bones of the middle ear. In some cases, fluid draining from the ear can make it hard to see the eardrum. 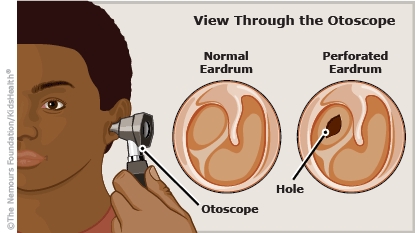 How Is a Perforated Eardrum Treated?

Most perforated eardrums heal on their own in a few weeks without treatment. Over-the-counter pain relievers can help ease pain.

To help prevent or treat an infection, the doctor may prescribe antibiotics. These might be a pill that your child swallows, but sometimes can be ear drops.

If the eardrum doesn't heal on its own in a few weeks, an ear-nose-throat (ENT) specialist may recommend an eardrum patch. In this procedure, a doctor puts a paper patch over the hole. Doctors may need to do this a few times until the eardrum fully heals.

If these treatments don't work, the ENT specialist might recommend a tympanoplasty. In this surgery, the surgeon attaches a small patch of the patient's own tissue or a man-made material to close the eardrum tear.

While recovering from a perforated eardrum, kids should:

Can Perforated Eardrums Be Prevented?

You can't prevent all perforated eardrums, such as those caused by an infection. But some are avoidable.

To help prevent a rupture: