Nosebleeds are common in kids 3 to 10 years old, and most are caused by nose-picking or dry air. They can be scary, but usually aren't serious. Most will stop on their own and can be cared for at home. 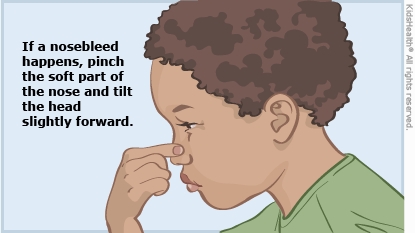 Call the Doctor if Your Child:

Get Emergency Care or Call the Doctor if Bleeding:

The most common kind of nosebleed is an anterior nosebleed, which comes from the front of the nose. Capillaries, or very small blood vessels, inside the nose may break and bleed, causing this type of nosebleed.

A posterior nosebleed comes from the deepest part of the nose. Blood flows down the back of the throat even if the person is sitting or standing. Kids rarely have posterior nosebleeds. They're more common in older adults, those with high blood pressure, and people who have had nose or face injuries.

Most anterior nosebleeds are due to dry air. A dry climate or heated indoor air irritates and dries out nasal membranes. This causes crusts that may itch, then bleed when scratched or picked. Common colds also can irritate the lining of the nose, with bleeding following repeated nose-blowing. Having a cold during dry winter weather is the perfect formula for nosebleeds.

Allergies also can cause problems, as doctors may prescribe medicine (such as antihistamines or decongestants) to control an itchy, runny, or stuffy nose. The medicine can dry out nasal membranes, leading to nosebleeds.

An injury or blow to the nose can cause bleeding, but most aren't a serious problem. But if your child has a facial injury that causes a bloody nose and you can't stop the bleeding after 10 minutes or have other concerns about the injury, get medical care right away.

While nosebleeds are rarely serious, there might be a problem if they happen a lot. If your child gets nosebleeds more than once a week, call your doctor. Usually, frequent nosebleeds are easily treated. Sometimes tiny blood vessels inside the nose are irritated and don't heal, which happens more often in kids with ongoing allergies or who get a lot of colds. A doctor might be able to help in these cases.

For bleeding not due to a sinus infection, allergies, or irritated blood vessels, a doctor may order tests to find the cause. Rarely, a bleeding disorder or abnormally formed blood vessels could be a possibility.

Can Nosebleeds Be Prevented?

Since most nosebleeds in kids are caused by nose-picking or irritation from hot dry air, using a few simple tips may help your kids avoid them:

Even with proper precautions, kids can still get a bloody nose occasionally. So if your child gets a nosebleed, try not to panic. They're usually harmless and are almost always easy to stop.