A to Z: Rash, Diaper

Diaper rash is a very common condition that can cause a baby's skin to become sore, red, and tender.

The rash usually occurs because the skin is irritated by soiled diapers that are left on for too long; friction from the diaper; or the use of certain brands of detergent, soaps, or baby wipes on sensitive skin. The plastic that prevents diapers from leaking also prevents air circulation, thus creating a warm, moist environment where rashes and fungi can thrive.

Also, the introduction of new foods can change the content and frequency of a baby's feces (poop), which can sometimes lead to a diaper rash. And diarrhea can make a diaper rash worse.

Diaper rash that lasts for more than a few days, even with changes to the diapering routine, might be caused by a yeast called Candida albicans (a type of fungus). This form of the rash is usually red, slightly raised, and has small red dots extending beyond the main part of the rash. It often starts in the creases of skin and can spread to skin on the front and back of the baby. Antibiotics given to a baby or a breastfeeding mom can lead to a yeast infection by killing off the "good" bacteria that keep the Candida from growing. 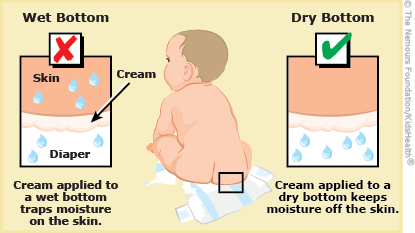 The best way to prevent diaper rash is by keeping a baby's skin as dry and clean as possible and changing diapers often so that feces and urine won't irritate the skin.

If the rash persists or gets worse, or if sores appear on the baby's skin, call your doctor. You should also seek medical care if the rash is associated with fever, pus drains from the rash, or your baby is irritable.