A to Z: Spondylitis, Ankylosing

May also be called: AS; Rheumatoid Spondylitis; Spondylarthroarthritis

Ankylosing spondylitis (ang-kih-LOH-sing spon-duh-LIE-tis) is a chronic (long-term) type of arthritis that causes inflammation in the joints of the spine and the pelvic bones. 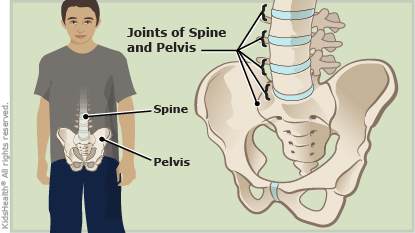 As part of healing, the body can form new bone. This may cause vertebrae to become fused together, leading to a less flexible spine. Some people with AS can have inflammation in other joints, the eyes, and rarely even in the heart and lungs.

Doctors don't know what causes AS, but there is a strong genetic association. It usually begins in the late teen years or young adulthood. The signs and symptoms of AS may get better or worse from time to time, but it is a lifelong condition.

Back pain and stiffness, joint pain, swelling, fatigue, and a hunched posture are common symptoms. Treatment involves medications and exercises to relieve symptoms and keep the back as strong and flexible as possible.

There is no cure for ankylosing spondylitis, but starting treatment as early as possible can help control pain and minimize complications.