An X-ray is a safe and painless test that uses a small amount of radiation to make an image of bones, organs, and other parts of the body.

In an upper GI X-ray (also called an upper GI series), a special type of X-ray camera sends beams of radiation through the upper GI (gastrointestinal) tract while a child drinks a thick liquid (barium sulfate). Images of the esophagus, stomach, and the beginning of the small intestine (called the duodenum) are recorded on a computer.

Barium looks white on the images, and when it fills the organs of the GI tract, it makes them visible. Gas in the stomach and intestines looks black.

The barium sulfate liquid looks like a light-colored milkshake and is often flavored for toddlers and young kids. It can be offered in a bottle or a cup with a straw. Occasionally, a child can't drink the liquid, so it’s given through a small plastic tube or syringe.

Tell the X-ray technician if your child recently:

These substances can affect the quality of the images. Also tell them of any allergies your child has.

What Happens During an Upper GI?

Your child’s stomach must be empty for an upper GI. Depending on your child's age, they’ll have to stop eating and drinking for a certain number of hours before the test.

An X-ray technician will position your child on the table and take an X-ray of the stomach with nothing in it. Then, a radiologist (a doctor who is specially trained in reading and interpreting X-ray images) uses a technique called fluoroscopy to do the upper GI series.

While your child drinks barium sulfate, the radiologist watches and records an X-ray video of the barium moving through the digestive system, and takes a series of still X-ray pictures.

The radiologist or technician may move your child on the table to help ensure that the barium coats the esophagus and stomach. As your childswallows and the barium moves through the GI tract, its path is seen on the monitor. When the still images are taken, kids may be asked to hold their breath and not move for 2–3 seconds. 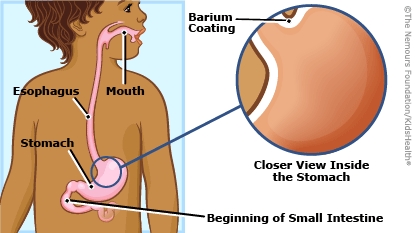 Why Are Upper GIs Done?

An upper GI X-ray helps doctors find the cause of swallowing problems, unexplained vomiting, nausea, abdominal discomfort, and severe indigestion. It can detect signs of problems such as ulcers, gastric reflux, hiatal hernia, or blockages or narrowing of the upper GI tract.

Because the test is done on an empty stomach, you might want to bring a drink or snack for your child for afterward.

The barium sulfate that your child drinks may have a chalky taste, but it's important that they take the full amount requested by the doctor.

Rarely, the barium can cause:

Barium sulfate makes stools (poop) light-colored and hard for a few days after the procedure, so your child might be constipated. Giving your child extra fluids can help.

What if I Have Questions?

If you have questions about the upper GI test or what the results mean, talk to your doctor.