Coarctation of the Aorta

What Is Coarctation of the Aorta?

Sometimes the coarctation is minor and might not even cause symptoms. Other times, surgery or other procedures are needed to treat it. 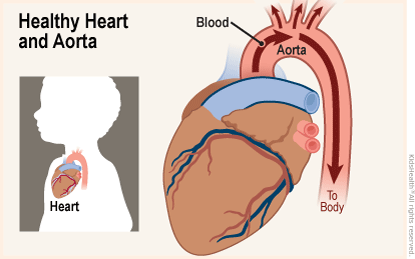 Coarctation of the aorta is a congenital defect, meaning that a baby is born with it. Doctors aren't sure why some people develop COA, but boys are almost twice as likely to have it than girls.

In a baby with a coarctation, the aortic arch also might be smaller than usual (hypoplastic).

In many people, the defect shows up with other birth defects or conditions, such as a ventricular septal defect (a hole in the wall between the heart's left and right ventricles). It's also common in girls born with Turner syndrome, a genetic disorder in which one of a girl's two X chromosomes is incomplete or missing.

Usually, COA is found early. But some people aren't diagnosed until they're teens or even adults. In those cases, it's usually because the narrowing in the aorta is not severe enough to cause serious symptoms until later in life. But even people who don't have major symptoms need treatment because COA can eventually cause problems. The defect doesn't go away on its own.

What Are the Signs & Symptoms of COA? 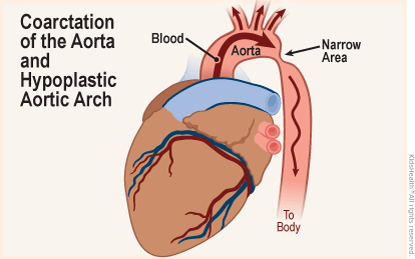 Abnormal blood pressure is often the first sign of COA. During a physical exam, a doctor may find that a child with a coarctation has higher blood pressures in the arms than in the legs. The doctor also might hear a heart murmur or notice that the pulse in the groin is weak or hard to feel. Any person diagnosed with high blood pressure should be checked for coarctation of the aorta.

Often, kids don't have any symptoms and the COA is discovered during a regular visit to the doctor. Kids who do have symptoms might have:

How Is Coarctation of the Aorta Diagnosed?

Doctors may refer a child with the signs or symptoms of COA to a pediatric cardiologist (a doctor who specializes in diagnosing and treating heart problems). The cardiologist will listen to the heart, feel the pulses, and check blood pressure.

The cardiologist might order an echocardiogram — a test that uses sound waves to create a picture of the heart and its circulation — and other tests that produce images of the heart, like a chest X-ray, a magnetic resonance imaging (MRI) test, or a computerized tomography (CT) scan.

COA must be treated quickly because it can cause high blood pressure and enlarge the heart. It also can cause dissection or rupture of the aorta, which can be fatal. Severe coarctations usually are found shortly after birth and repaired by surgery immediately.

How Is COA Treated?

Coarctation of the aorta can be repaired with surgery or other procedures. One of the most common ways to fix a coarctation is to remove the narrow section and reconnect the two ends of the aorta.

After the defect is fixed, most symptoms of COA disappear right away because the blockage that caused those symptoms is gone. Some people will still have high blood pressure for a while and might have to take medicine to control it.

Kids and teens who have had surgery often feel completely better after a week or two, and those who have had the balloon treatment feel better even sooner, often within a couple of days.

But doctors recommend that all patients avoid some physical activities — especially lifting heavy objects or sports that could cause an impact to the chest — for several weeks or months to give the body enough time to heal. Someone whose blood pressure remains high may have to continue to limit certain activities until the blood pressure lowers.

Kids who've had a COA corrected will need to see their doctors regularly. Sometimes, the narrowing can return after surgery or balloon dilation treatment. Visits to the cardiologist every year or two after recovery will let the doctor monitor blood pressure and look for signs that the COA could be returning.

If your child has COA or has had a coarctation repaired, call the doctor if you see shortness of breath, chest pain, or fainting.

Overall, kids who have had the condition can expect to lead a normal life after treatment.

If your child has COA, it can feel overwhelming. But you're not alone. The care team is there to support you and your child. Be sure to ask when you have questions.

You also can find more information and support online at The American Heart Association.