Nursemaid's elbow is a common elbow injury in young kids. It happens when a ligament slips out of place and gets caught between two bones of the elbow joint. 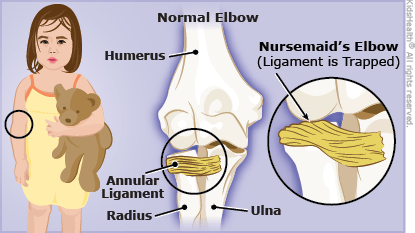 Nursemaid's elbow is a common, often preventable injury that's usually due to sudden pulling on a child's arm.

Most cases are in kids 1 to 4 years years old. Their ligaments (the elastic-like bands that hold bones together) are a bit loose. With just a small amount of force, a ligament in the elbow can easily slip into the joint and get stuck.

Sometimes the ligament gets unstuck by itself. In most cases, a health care professional gets it back into place by doing a quick, gentle move of the arm called a reduction.

Nursemaid's elbow is a common injury in toddlers and preschoolers. As kids get older, the ligaments tighten. Most won't get nursemaid's elbow past age 5, though it can happen up to age 6 or 7. It's important to try to prevent it by not pulling, tugging, or swinging a child by the arms or hands.