Hey, get your finger outta there! Instead of picking them out, let's learn about those little blobs. Yeah, we're talking about boogers.

To understand what boogers are, you need to know about mucus (say: MYOO-kus). Mucus is the sticky, slimy stuff that's made inside your nose, airways, and even your digestive tract. If you're like lot of kids, you have another name for nose mucus: snot. Your nose and sinuses make about a quart (about 1 liter) of snot every day. 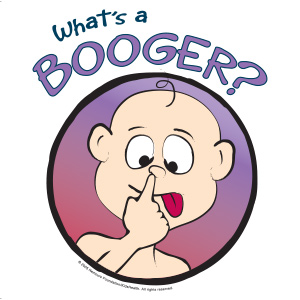 Mucus has a pretty important job — it keeps the lining of your nose moist and warms the air you breathe. Mucus also protects the lungs. When you breathe in air through your nose, it contains lots of tiny things, like dust, dirt, germs, and pollen. If these made it all the way to the lungs, the lungs could get irritated or infected, making it tough to breathe. Luckily, snot helps trap this stuff, keeping it in the nose and out of the lungs.

After this stuff gets stuck inside the nose, the mucus surrounds it and some of the tiny hairs inside the nose called cilia (say: SIL-ee-uh). These hairs help move the mucus and the trapped stuff toward the front of the nose or the back of the throat. When the mucus, dirt, and other debris get dry and clump together, you're left with a booger.

Boogers can be squishy and slimy or tough and crumbly. Everybody gets them, so they're not a big deal. In fact, boogers are a sign that your nose is working the way it should!

If you have to get rid of boogers, your best bet is to blow 'em out of your nose and into a tissue. Picking your nose isn't a great idea because boogers contain lots of germs and because poking around in your nose can make it bleed.