What Is a Gene Mutation?

A gene mutation (myoo-TAY-shun) is a change in one or more genes. Some mutations can lead to genetic disorders or illnesses.

Genes are short sections of DNA. They determine our traits, which are things like hair color, height, body type, and other things that make a person unique. Genes also play a role in a person's risk for some diseases and health conditions. Each of us has about 24,000 different types of genes.

DNA (deoxyribonucleic acid is the carrier of all our genes. Each person gets one copy of DNA from their mother and one copy from their father. DNA creates a code using four chemicals called nucleotides (NEW-klee-uh-tydes). This code determines which genes a person has. DNA is located inside the chromosomes.

What Is a Chromosome?

A chromosome (KRO-muh-sohm) is an X-shaped thread-like structure in the body's cells. It contains DNA. Humans have 23 pairs of chromosomes. 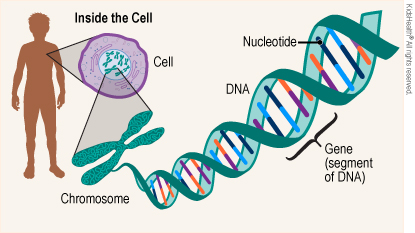 What Causes a Gene Mutation?

A gene can mutate because of:

If a parent carries a gene mutation in their egg or sperm, it can pass to their child. These hereditary (or inherited) mutations are in almost every cell of the person's body throughout their life. Hereditary mutations include cystic fibrosis, hemophilia, and sickle cell disease.

Other mutations can happen on their own during a person's life. These are called sporadic, spontaneous, or new mutations. They affect only some cells. Damage from the sun's ultraviolet radiation or exposure to some types of chemicals can lead to new mutations. These mutations are not passed from parents to their children.

Do All Gene Mutations Cause Health Problems?

Most gene mutations have no effect on health. And the body can repair many mutations. Some mutations are even helpful. For example, people can have a mutation that protects them from heart disease or gives them harder bones.