MRSA is a type of staph bacteria. MRSA (say: MUR-suh) stands for methicillin-resistant Staphylococcus aureus. It causes infections that can be hard to treat.

Many people have staph bacteria living harmlessly on their skin or in their noses. Staph bacteria that enter the body through a cut, scrape, or rash can cause minor skin infections. Most of these heal on their own if the wound is kept clean and bandaged, but sometimes antibiotics are needed.

MRSA differs from other staph bacteria because it doesn't respond well to most of the antibiotics used to treat staph infections. Bacteria that are hard to kill are called "resistant." They become resistant by changing in some way that prevents the antibiotic from doing its job. Methicillin is an antibiotic normally used to treat staph, so these bacteria are called "methicillin-resistant."

What Are the Signs & Symptoms of MRSA?

MRSA infections look like other skin infections. They often develop around open sores, but also happen on intact skin. There can be red, swollen, painful areas or bumps on the affected skin. They sometimes ooze fluid or pus (an infected area with pus is an abscess). Some kids also have a fever. 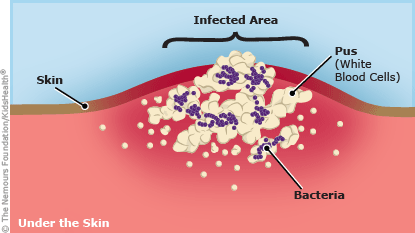 In more serious cases, the infection can spread to the blood, lungs, bones, joints, or other parts of the body.

MRSA is contagious. Like all other staph bacteria, it can spread:

In the past, MRSA mostly affected people in nursing homes or hospitals. It was more likely to be seen in people with weak immune systems. It was also more common in people who had a surgical wound. But now some otherwise healthy people outside of those settings are getting the infection.

Sometimes, people can be "carriers" of MRSA. This means that the bacteria stay on or in their bodies for days, weeks, or even years without causing symptoms. But they can spread it to others. That's why washing hands well and often is so important.

How Is MRSA Diagnosed?

A doctor will examine the affected skin, and sometimes will take a sample of pus or blood. This goes to a lab for testing to find out which bacteria are causing the infection.

How Is MRSA Treated?

Can MRSA Be Prevented?

Call the doctor if:

Bacteria become resistant to antibiotics when they are not used properly. This includes:

Taking antibiotics exactly as prescribed can help stop bacteria from becoming resistant to them. Take these precautions: