A to Z: Cyst, Ovarian

An ovarian cyst is a noncancerous sac filled with fluid or semisolid material that develops on or inside a woman's ovary. 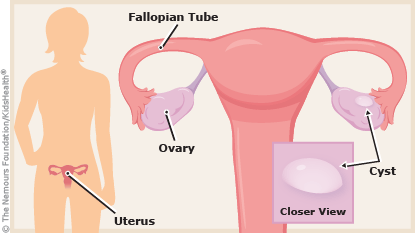 The ovaries are oval-shaped organs that are part of the female reproductive system. They produce, store, and release eggs during a process called ovulation, which is part of a female's monthly menstrual cycle. Most ovarian cysts develop during the normal menstrual cycle. These are called functional cysts, and there are two kinds: follicular cysts and corpus luteum cysts.

During ovulation, a small sac called a follicle grows on each ovary. Follicles are where the eggs develop. If a follicle fails to break open and release its egg, fluid stays in the follicle and it becomes a follicular cyst. After the egg has been released, the follicle is called a corpus luteum. If the opening through which the egg has passed seals off, fluid can build up and form a corpus luteum cyst. Rarely, another type of ovarian cyst, called a pathologic cyst, can form as a result of ovarian cancer or other conditions.

Usually, ovarian cysts cause no symptoms, but if they grow large, rupture, or bleed, they can cause pain, abdominal swelling, or bloating. Rarely, they can cause twisting of an ovary (ovarian torsion), which is associated with severe pain and is a medical emergency.

If cysts are painful, a doctor may prescribe birth control pills to alter their growth, or they may be removed by a surgeon.

Ovarian cysts are quite common in women of childbearing age, and they usually don't cause any problems. In most cases, ovarian cysts will disappear on their own and treatment isn't necessary. Most cysts will heal within 6–8 weeks.