Why Do Ears Make Wax?

Earwax is made in the outer ear canal, the area between the fleshy part of the ear on the outside of the head and the middle ear. The medical term for earwax is cerumen (seh-ROO-mun).

Earwax has some important jobs. It: 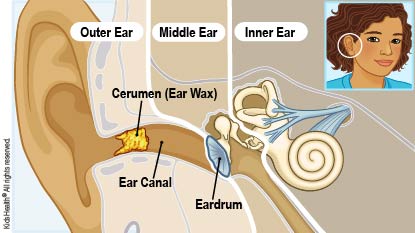 Does Earwax Need to Be Removed?

Usually, there's no need to remove earwax because it comes out by itself. Sticking anything into a child's ears raises the risk of infection or damage to the ear canal or eardrum. Cotton swabs are handy for a variety of grooming needs, but should not be used to remove earwax. In most cases, regular bathing is enough to keep it at healthy levels.

While some people have more earwax than others, in general the ear makes as much wax as it needs. Rarely, kids' ears do make too much earwax. And sometimes earwax can build up and block the ear canal, especially when pushed in by a finger, cotton swab, or other object. This is called "impaction." If it affects hearing or causes pain or discomfort, a doctor can remove it.

Parents — and kids — shouldn't attempt to remove earwax at home, even with remedies that promise to be safe and effective. Doing so risks damage to the ear canal and, possibly, a child's hearing.

What Can Parents Do?

If your child complains of ear discomfort and you see earwax in the ear, it's OK to wipe the outside of the ear with a washcloth. But don't use a cotton swab, a finger, or anything else to poke inside the ear. It could damage the delicate ear canal and eardrum, or pack the wax in even further.

Check with your doctor before using an over-the-counter earwax removal treatment.

Call the doctor if your child has:

In infants and toddlers, tugging at the ears can be sign of an ear problem.

Earwax removal usually is done in the doctor's office. There might be a little discomfort but it isn't painful. If a child can't sit still or cooperate, the doctor can remove it in an operating room while the child is under general anesthesia.

Doctors can remove earwax in different ways, including:

Removal takes only a few minutes. If there's a sign of infection, the doctor may prescribe antibiotic ear drops.

Ear candling has gained a lot of attention as a home remedy for earwax removal. But it hasn't been proved to be safe or effective, and can be dangerous.

In ear candling, one end of a cone-type device is inserted into the ear canal and the other end is set on fire. The idea is that the fire and the cone form a vacuum and extract the wax. But trying this at home carries a high risk of:

Whenever you have any concerns about your child's ears or hearing, call your doctor.